A couple of weeks ago, I learned from one of my friends that Gong Cha Philippines has finally reached the shores of Tacloban and opened its first branch in SM Savemore!

For someone who is a fan Park Seo Joon, it’s pretty embarrassing to say that it took me a little over two months before I found out about it. In my defense though, I don’t get to go out much and even when I do, I don’t visit the downtown area where SM Savemore is located because there’s no reason to since I live near Robinsons Mall. Also, I didn’t realize sooner that I wasn’t following Gong Cha Philippines’ page on Facebook so I missed the update about the opening of the Tacloban branch. Ooops!

If I had known about it sooner, I’d probably be one of the many people who lined up on the opening day. Anyway, I made a mental note to pay Gong Cha a visit as soon as I get the chance and this week, I finally got to go there and grab my first ever Gong Cha drink!

I was so excited to see Park Seo Joon’s standee but because there were a lot of people, I had to suppress my squeals and went to check their menu instead. I wasn’t really planning on getting myself a drink right then because I thought it was going to be expensive but upon seeing the prices, I hurriedly lined up and ordered a taro milk tea for myself. Yes, taro. It’s my go-to milk tea flavor when it’s my first time to buy a drink from a milk tea shop because I think it’s the safest choice.

The original price of the Taro Milk Tea was P105 but I ordered a no-pearl milk tea so it became P95 and then I used my PWD card, which automatically entitles me to a 20% discount and no VAT, so I only paid P68 for my Gong Cha drink. Score! While Gong Cha’s Taro Milk Tea had a nice and refreshing taste, I think I’d still go for Chatime’s Taro Milk Tea because Gong Cha’s had a slightly watered down taste and it wasn’t as creamy as Chatime’s.

That time, there was only one staff on duty so there were about 4-5 people waiting for their delicious Gong Cha drinks to be ready and 3-4 people standing in line and waiting for their turn to order. It’s was good that most of the customers were ladies who were busy watching Park Seo Joon on the flat screen TV so no one complained while he took orders, gave the change, made the drinks and served them. But I personally think that they should always have at least two people manning the shop just in case a flock of people suddenly comes and order a lot of drinks. I got my first ever Gong Cha drink about 15 minutes after I ordered because the staff couldn’t start making the drinks immediately since there were still people waiting in line.

There were only a few tables and the chairs were a little bit uncomfortable to sit on for me since I’ve been experiencing some back pains lately. But I guess it’s okay since people sit there only for a couple of minutes just to wait for their order then they leave right away. However, adding a few more chairs would be great because there were like one or two people who were waiting for their orders while standing in a corner. 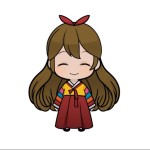 Angeli is a soloprenuer and blogger who translates Korean contents when she’s in the mood. She is currently working on getting her bachelor’s degree in Netflix and VIU. Her favorite Korean show is “Hello Counselor”.

A girl living in a small city in the Philippines who is learning Korean through self-study since 2011 and has worked at a Korean military camp as an interpreter. A Typhoon Haiyan survivor.

Meloncreme is an online journal about my life as a fangirl, a Korean language enthusiast and everything in between.